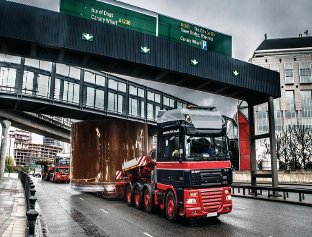 The big City move 22 March, 2017 TBMs are being built on an ever-larger scale, pushing the limits our congested cities can accommodate. Rhian Owen speaks with two freight forwarding companies about the obstacles they face when machines move through large cities > read more

Getting there 22 March, 2017 Moving oversized cargo takes coordination and requires extensive research. Tunnels & Tunnelling speaks to three organizations that specialize in taking on this heavy lifting

Setting out exclusion zones 11 July, 2016 Following a tragedy on the Crossrail project, the British tunnelling industry has come together to produce a best practice guide on SCL exclusion zone management

HDD Drivers 30 June, 2015 The current market for horizontal directional drilling (HDD) may be reflecting economic and political issues around the world but there’s no doubt that underlying demand remains strong. Keren Fallwell reports.

Lighting legacies 24 June, 2015 Looking at the transition from traditional lighting to new LED options, Michael Maltezos, of Kenall Lighting discusses the lighting for the Port of Miami Tunnel project and what it means for the future of tunnel lighting.

On the radar 24 June, 2015 Ground penetrating radar was used to investigate pavement settling in the Cumberland Gap mountain tunnel. Roger Roberts, senior software engineer for Geophysical Survey Systems, Inc, working with engineers at the Kentucky Transportation Center at the University of Kentucky, explains the research.

Keep on trucking 17 January, 2014 In this insight take on construction vehicles, technical journalist Jodie Satterthwaite looks to the mining industry for underground requirements

What goes up 19 December, 2013 Ensuring the correct lifting strategy is vital to the success of any tunnelling project, reports technical journalist Bernadette Ballantyne.

Forward March 19 December, 2013 Bahram Salehi and Mahsa Shahandeh present their work on the validation of TBM advance rate predictions, with reference to a case study in Iran.

One machine, two modes 12 December, 2013 Hybrid machines gain ground in the industry. Desiree Willis, technical writer for Robbins reports on the increase in demand, and asks why.

Golden soil and wealth for toil 04 December, 2013 Few countries have as many mineral resources as Australia, and in such quantities, from coal and oil to iron, gold and nickel. Mining and other extraction is an increasingly large part of the economy, reports technical journalist Adrian Greeman