Our editorial board comprises a specialist group of leading industry figures who, in conjunction with the TUNNELS editorial team, identify the main drivers of the industry helping to produce regular, thought provoking opinion pieces on the latest issues, challenges and developments. 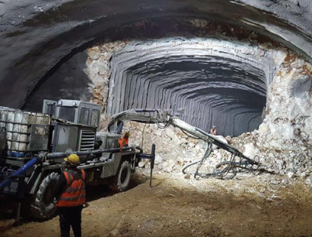 Tunnel vision 07 September, 2021 TunnelSkills – the national specialist training forum for the UK tunnelling industry – specialises in the application of immersive learning and new technology to improve training, learning and recruitment in the sector

A focus on efficiency within tunnel ventilation 02 September, 2021 Worldwide, electric motors represent around 50% of global electricity consumption (EU). The need to achieve a more sustainable environmental future clearly requires focus on the subject of motor efficiency. Any gains in motor efficiency will have a directly influence on the fight against climate change through reducing global electrical consumption and related CO2 emissions.

Spraying for success 12 August, 2021 Dr Alun Thomas of All2plan Consulting outlines some of the rudiments of sprayed concrete and gives a few tips that could prove useful to young engineers – and maybe to those not so young

German team wins Musk boring competition
TUM Boring, in association with the Technical University of Munich, has won The Boring Company’s inaugural Not-a-Boring Competition 2021, having completed a tunnel in the fastest time with its mechanical excavation machine.

India plans major tunnel beneath Brahmaputra River
India is planning to build a road tunnel under the Brahmaputra River in the northeast of the country as a military response to China’s strategy in the troubled border region.

TBM for Scarborough Subway Extension nearing completion
Teams at Herrenknecht’s factory in Schwanau, Germany are progressing with the tunnel boring machine that will bore what will become Toronto’s biggest subway tunnel.