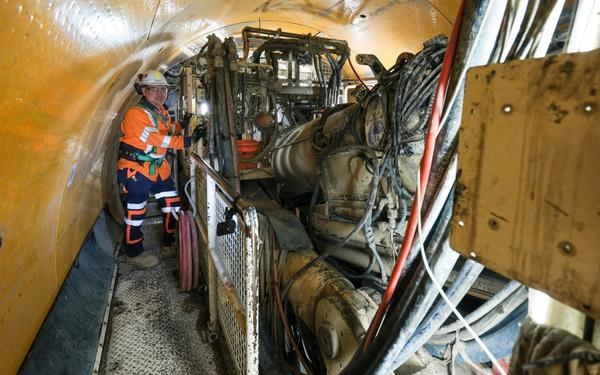 Watercare’s executive programme director, Shayne Cunis, said undersea tunnelling was rare in New Zealand and the milestone was a huge credit to the team.

“We’ve got some very talented tunnellers and their knowledge and expertise has showed all the way along this project – but especially with the completion of the Manukau Harbour section,” he said.

Tunnelling took place at 15-20m below the seabed, with a maximum of 15 people working underground at a time.

It is the third undersea tunnel Ghella Abergeldie JV’s tunnel manager, Michele Petris, has worked on. His last project was the new Metro tunnel under Sydney Harbour.

“I am very proud of our team. From a technical perspective, tunnelling under the seabed is no different from tunnelling on the mainland but the difference is that in the event of an emergency, rescues become more difficult,” he said.

“We wanted to ensure there were no hold-ups or delays while we did the undersea section and we achieved that. Now we will inspect the cutterhead and see if any adjustments need to be made before we begin tunnelling again towards central Auckland.”

Hiwa-i-te-Rangi began its journey in August last year and has now travelled more than 4km since leaving a site next to Mangere Wastewater Treatment Plant. The TBM has a 5.4m diameter and the tunnel a completed diameter of 4.5m.

A micro-TBM called Domenica recently made its third breakthrough on the first link sewer. It will travel another 300m to complete the link sewer before being refurbished and starting work on the second link sewer next year.