A milestone has been reached on the Lyon-Turin high-speed rail line with breakthrough on the Saint-Martin-La-Porte tunnel.

The SMP4 group led by Spie Batignolles and comprising Eiffage, Ghella Spa, CMC Di Ravenna and Cogéis Spa broke through at a depth of 600m to connect the two fronts of the rail line: the east side, towards Turin and west side, towards Saint-Jean-de-Maurienne.

Around 9km of the 12km exploratory tunnel was excavated by an 11.26m-diameter single shield TBM, and 3km with traditional methods. Construction started in 2015.

The crossing cuts through carboniferous rocks composed of schistose rock, the most complex geological area of the project and characterised by strong convergences. 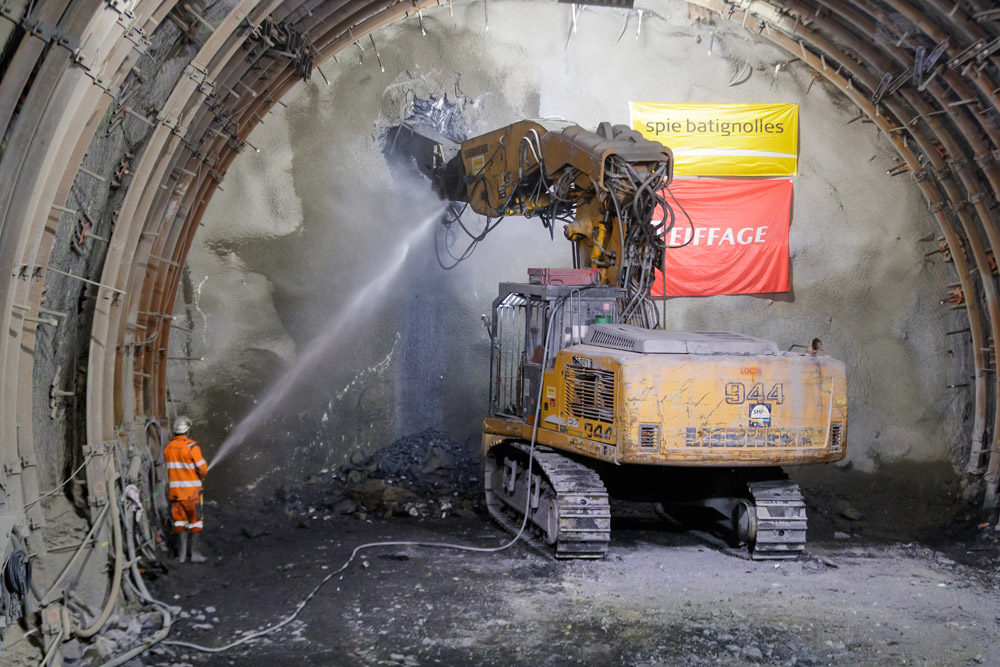 The Lyon-Turin line will be 270km long and include the 57.5km Mont Cenis Base Tunnel (167 miles). The tunnel, which will connect Italy’s Susa Valley with France’s St Jean-de-Maurienne, will enable passenger trains to travel at speeds up to 220km/h and freight trains at 110km/h.

The Lyon-Turin line is designed to transport 40 million tons of goods and 5 million passengers each year, shifting 1 million heavy vehicles from road to rail and reducing annual CO2 emissions by 3 million tons.

A consortium led by Vinci Construction Grands Projets and including Dodin Campenon Bernard, Vinci Construction France TP Lyon and WeBuild has the Lot 2 contract to build the 23km tunnel between Saint-Martin-la-Porte/La Praz and Modane.

A consortium headed by Implenia and including NGE, Itinera and Rizzani De Eccher has the Lot 3 contract for the 3km section of tunnel between the French entrance portal at Saint-Julien-Montdenis and Saint-Martin-La-Porte. This section will be excavated using traditional methods (hydraulic breakers and/or explosives).