A TBM working on wastewater treatment works in the Arabian Gulf, off the coast of Kuwait, has been lifted from the seabed.

The Al Hassanain and Joseph Gallagher Joint Venture retrieved the TBM in just four days after it completed pipejacking 1,973m of pipe for part of Kuwait’s major wastewater project and the longest sea outfall in the Middle East. The joint venture was awarded the £46m contract for the Umm Al Hayman wastewater treatment project in October 2019 by WTE Wassertechnik GmbH.

The recovery of the Herrenknecht TBM, named Emma, was a complex operation in challenging weather, with winds up to 20kph and temperatures up to 49 deg Celsius out at sea. The 14m-long, 140t TBM was located 10m under the seabed.

The sand surrounding the machine was carefully excavated with airlifts and then the TBM was raised using a combination of air bags and a crane. It was then towed 40km before a 350t crawler crane lifted it from the sea onto the KIPIC jetty near the AL Zour Power Station. 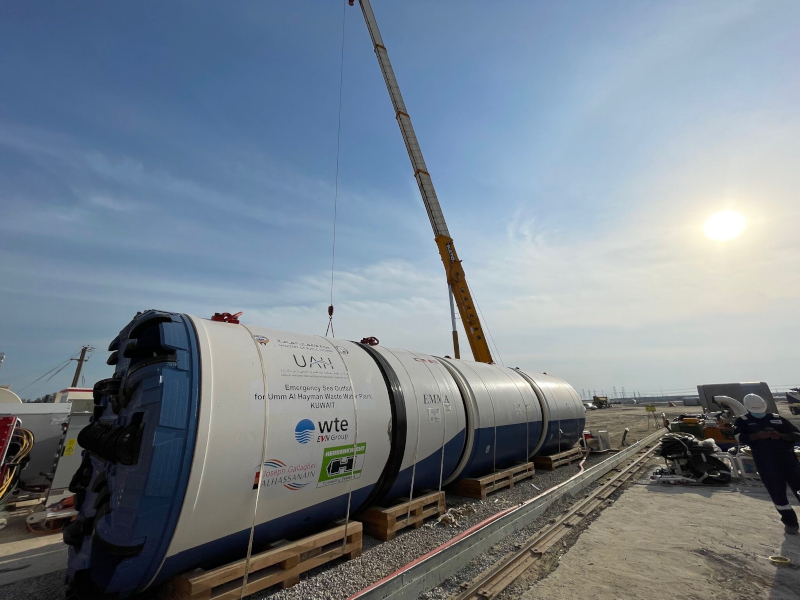 Joseph Gallagher Group chairman Josie Gallagher said the successful recovery of the TBM was “a wonderful effort from all involved and is testament to the exemplary teamwork and skill that has characterised the entire project. A huge thanks to all the project team, both from JGL and our JV partners Al Hassanain – a truly outstanding partnership and achievement”.

The final part of the project will now involve the installation of a 309m-long diffuser beneath the Arabian Gulf.