The extension of the Hengqin Line, a cross-border light railway transport (LRT) route which connects the Macao Special Administrative Region (SAR) and the neighboring Guangdong-Macao cooperation zone on Hengqin Island in South China's Guangdong Province, started its construction on Wednesday at the Hengqin Island site. 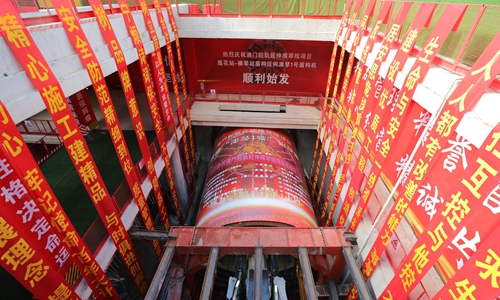 Namkwong Real Estate Co, China Civil Engineering Construction Corporation (CCECC) and China Railway16th Bureau Group Corporation are engaged in the project, and the Aoqin No.1, the largest shield tunneling machine used in Macao with diameters of 7.98 meters and 87 meters in length, was used in the construction.

The line has an overall length of 2.2 kilometers, starting from the elevated station HE1, located nearby the Lotus Bridge in Macao, which is connected to the Lotus Checkpoint Station, part of the Taipa Line. It runs along the Lotus Bridge and crosses the Shizimen Waterway before entering Zhuhai's Hengqin Island through an underwater tunnel, and then arrives at the underground HE2 station located in front of Hengqin Port.

The extension of Hengqin Line is a priority item of public infrastructure. It will enhance the regional cooperation among Guangdong-Hong Kong-Macao Greater Bay Area (GBA), helping Macao to be included in the "one-hour living circle" in the GBA.