Australia – A joint venture of John Holland and CPB has been chosen to build the West Gate Tunnel project in Victoria. The Aurecon Jacobs joint venture will carry out engineering design for the project.

The West Gate Tunnel project, one of Victoria’s largest ever road projects, will deliver an alternative route to the West Gate Bridge, provide quicker and safer journeys, and remove thousands of trucks from residential streets.

A spokesperson said of the scope, “Design and construction works include widening the West Gate Freeway from eight lanes to 12 between the M80 Ring Road and Williamstown Road; a 2.8km eastbound tunnel and 4km westbound tunnel under Yarraville; a new bridge over the Maribyrnong River; an elevated road along Footscray Road to the Port of Melbourne, CityLink and the city’s north; and major new cycling and pedestrian paths.”

Two 15.6m-diameter TBMs will construct the 14.1m id tunnel, forming a precast segmental concrete lining with cast-in ethylene propylene diene gaskets. The segments will be reinforced with steel fibre and have a strength of 50MPa. Some traditional cage reinforcement will be used in places, mostly adjacent to cross passages.

The geology in the area varies from the alluvium of the Brighton Group and Newport Formations, to weathered older volcanics basalts, brecciated basalts and high strength basalts of the newer volcanics.

David Hake, the contractor’s construction director, added: “The ground conditions in Melbourne’s inner west are varied and complex – our large diameter TBMs will need to tunnel through ground conditions which range from silts and sediments through to the strong basalt of the newer volcanics.

“From a broader perspective, the West Gate Tunnel Project is just on one of many major infrastructure projects taking place in Victoria and other parts of Australia, so one of our big challenges will be making sure we attract and retain the best people to come and work on this city-shaping project

Construction work is due to begin in 2018 and the project should enter service in 2022. 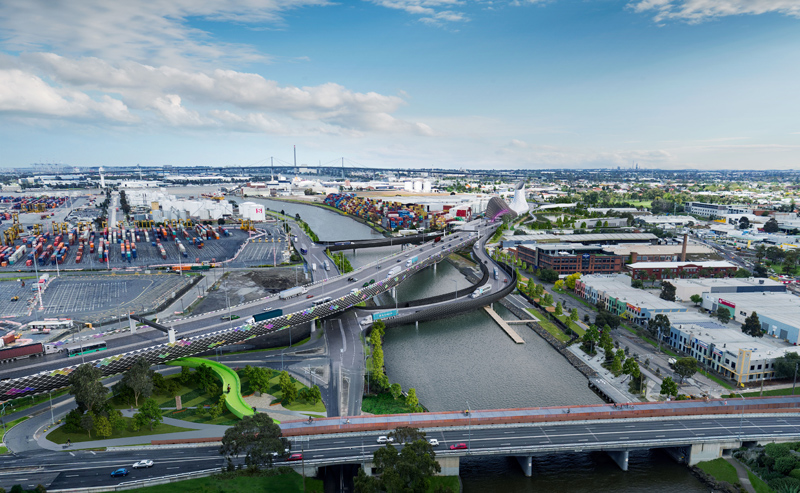