A 2.7km (1.7 mile) network of conveyors has begun operating in West London, and will move more than five million tonnes of spoil excavated for the construction of HS2.

The conveyor will remove the need for one million lorry movements from roads in West London, reducing traffic congestion and emissions in the local area. 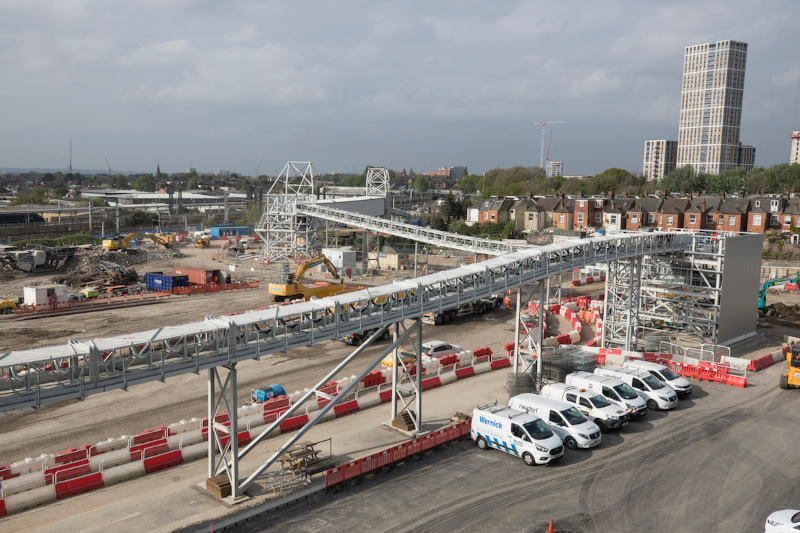 The conveyor network has three spurs, serving the Old Oak Common station site, the Victoria Road Crossover box site, and the Atlas Road site. At Old Oak Common, HS2 Ltd’s station contractor, BBVS JV, will use the conveyor to remove the 1.5 million tonnes of spoil excavated for the station box.

SCS JV will use the spur that serves Victoria Road Crossover Box site to transport spoil excavated for the crossover box. In addition, the spoil excavated in the construction of the Northolt Tunnel East, when two TBMs are launched from the site in late 2023, will also be transported to the Logistics Hub via the conveyor.

From Old Oak Common, the conveyor runs at 2.1m per second, and the journey to the Logistics Hub takes 17.5 minutes. The system includes sound barriers and a cover to prevent noise and limit dust dispersal.

From the Logistics Hub, the spoil will be taken by rail to three destinations –Cambridgeshire, Kent, and Warwickshire – where it will be reused, filling voids to be used for redevelopment.

To date, the Logistics Hub has processed over 430,000 tonnes of spoil, with more than 300 trains distributing the spoil to its end destination.

Balfour Beatty Vinci Systra project director Nigel Russell said the conveyor was an example of how the joint venture was seeking new ways to reduce carbon emissions on the project.

After officially turning on the conveyor, rail minister Huw Merriman said the system “brings us one step closer to our goal of delivering a cleaner transport network”.

“These conveyors are just one way in which HS2 is transforming the future of construction, by keeping the impact on the environment and local community to a minimum,” he said.