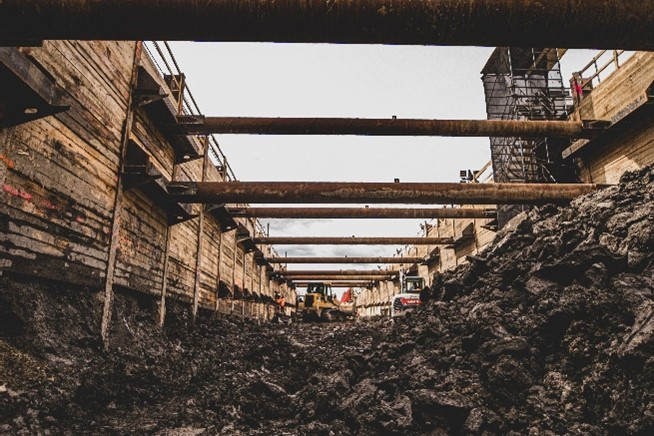 More than 200,000m3 of soil was removed from both the station box and the portal area that leads into the station from Finch Avenue West. It is by far the biggest dig on the Finch West LRT project.

The work required excavating underneath two roof structures for Highway 27, which were built from the top down and connect the portal to the station structure under Humber College Boulevard.

“Finch Avenue West is busy enough, but excavating a below-surface light rail transit station next to a major hospital and a busy college requires strong safety processes and a lot of attention to detail,” said Eric Chiasson, Mosaic Transit Group’s construction manager for the site.

“We excavated around and underneath storm sewers, water mains, communication lines and high-voltage power cables, dug under a busy roadway and overcame so many logistical challenges to get to this point.”

The 11km LRT will consist of a below-grade terminal stop at Humber College, 16 surface stops, as well as an underground interchange station at Keele Street that connects with the new Finch West Subway Station on the Toronto-York Spadina Subway Extension. The project also includes a maintenance and storage facility for the light rail vehicles and other required components, such as trackworks, signaling, communications, and public infrastructure.