The section between Chunniganj and Nayaganj is part of the 23km-long Corridor-1 of the project and will be excavated using two Terratec EPBMs.

The first machine, named Nana after freedom fighter Nana Saheb Peshwa, started on the down-line tunnel from Bada Chauraha to Nayaganj yesterday. The second TBM, named Tatya after Tatya Tope, a general in the Indian Rebellion, will begin work on the up-line bore in two weeks time. 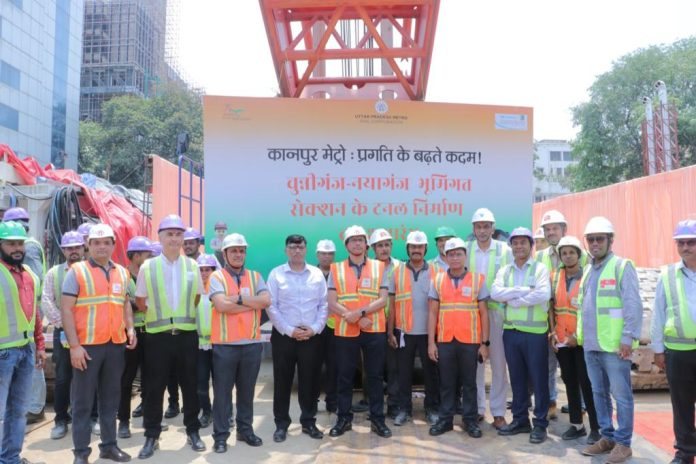 The two EPBMs, which are 80m long and have a 6.52 diameter, are each expected to progress 10m a day. They will bore through geology comprising soil, clay, silt and sandy silt.

Contractor Gulermak-Sam India JV chose two EPB machines equipped with a spoke-type cutterhead with 57% opening. For added versatility, Terratec designed the cutterhead to enable cutting tools to be exchangeable for 17in disc cutters, allowing the machine to bore through diaphragm walls and any unexpected obstacles, such as old wells and foundations. Tunnel linings will comprise 275mm-thick x 1,500mm precast universal-style lining rings of five segments plus key.

“The TBMs Nana and Tatya will lead our way to fulfil the dream of a world-class metro system in Kanpur,” he said.  “The stretch between Chunniganj and Nayaganj is one of the busiest routes of the city and covers several prominent places. With the help of these state-of-the-art TBMs we will be able to construct underground tunnels in the heart of the city with complete safety without affecting the traffic on the roads. As construction work on the underground section between Kanpur Central and Transport Nagar has also commenced, it is my firm belief that our team with their dedication will be able to achieve decided targets in the stipulated time.”