Great Britain - The TBM has broken through on the Shieldhall project. At GBP 100M, Scotland’s largest wastewater tunnel has taken 15 months to excavate.

The main portion of the works is a 5km-long, 4.7m-diameter segmentally lined tunnel designed by Aecom. It was excavated by a Herrenknecht slurry TBM that will erect around 3,250 rhomboidal rings during its drive, which are each 1.5m long, 250mm thick and reinforced with 35kg/m3 of 4D Dramix fibres supplied by Bekaert Maccaferri.

There was no special inner lining to contend with the waste, just the concrete lining and VIP gaskets making the seal.

The tunnel is relatively flat – a 5km length but only 3m difference in terms of level to satisfy the gravity requirements. In terms of geology, after the clays and made ground of the launch pit, the TBM hit bedrock made of sandstone and mudstone. Cutter wear was higher than expected along the drive.

A spokesperson for the apparently pleased client, Scottish Water, said: “As life above ground in the Queen’s Park area continued as normal in the darkness and rain late last night, the TBM completed the installation of the last of more than 3,200 concrete rings that form the tunnel before its giant cutting head emerged at the bottom of a 16m-deep shaft to cheers and applause from some of the workers involved.”

The tunnel will be commissioned in 2018, relieving the pressure on the water treatment plant at Shieldhall, increasing the network capacity by 100,000m3 and improving local river quality. 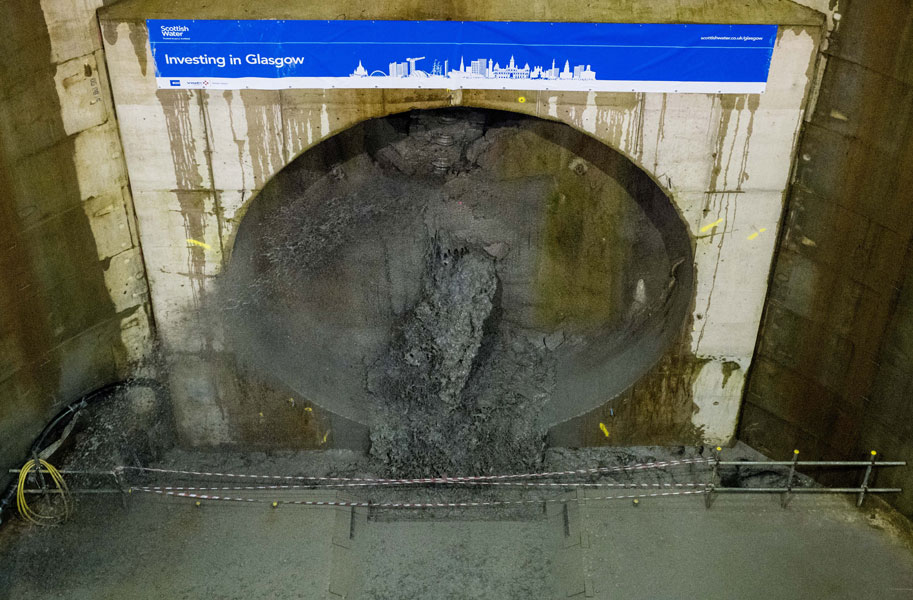 Breakthrough after 15 months of tunnelling