The winners of this year’s ITA Tunnelling and Underground Space Awards have been announced during an online event. 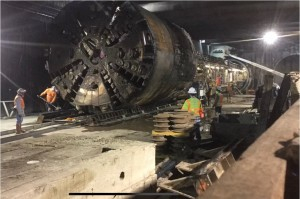 “The Tunnelling Awards is a celebration of the great milestones and the great innovations achieved. It also highlights the contributions made to our planet and people. This year, 70 nominations from almost 20 countries have been considered by a panel of independently selected judges. The ceremony today rewards the best in our industry, from the largest projects on earth right through to the latest innovations and productions, he said.”

This year’s winners are:

Project of the Year incl Renovation (up to €50m): Guanyinyan Tunnel: an urban tunnel project of the unequal span four-arch tunnel with two-way and ten-lane

Technical Innovation of the Year: Unprecedented in-tunnel diameter conversion of the largest hard rock TBM in the US

Beyond Engineering: Multi-pipe jacking method for the construction of city-core metro station in soft soil stratum

Product/Equipment Innovation of the Year: Integration of robotics into the construction works of the Chuquicamata underground mining site

Young Tunneller of the Year: Erica Frederickson (US)