Germany – TBM manufacturer Herrenknecht has been nominated for an innovation award at Bauma, the world’s largest construction equipment trade show. Engineers at the company’s factory in Schwanau will have their fingers crossed at the event in Munich this April.

The nomination is for the company’s E-Power Pipe system for the trenchless installation of underground cables. Herrenknecht claims that the innovation closes a technical gap because it allows for small diameter drives with 10x greater lengths than were previously possible, as well as shallower depths, greater precision, and increased speed.

A spokesperson for the company said, “The heart of the system is the fully remote controlled tunnel boring machine AVNS350XB, which has an excavation diameter of 505 millimeters and is designed for drive lengths of more than 1,000 meters. The machine can keep to the planned alignment with high precision and thus cross safely under existing infrastructure such as pipelines, roads, railways or smaller bodies of water. Individual boreholes can be placed a small distance apart of only 1 – 2 m, so several lines can be installed in parallel.

“The tunnelling machine is equipped with a jet pump and an integrated hydraulic power unit. With conventional methods, space restrictions limited muck removal over longer sections and as a result also limited the drive lengths possible. Through the use of the jet pump for transporting the muck, up to 10 times longer tunnelling distances can be realized at high speeds in the small diameter range.

“At the starting point, a newly developed push and pull unit is installed and its thrust is used to push the jacking pipes and the TBM along the specified route in the direction of the target point. The borehole remains securely supported by the machine and the jacking pipes the whole time. After breakthrough at the target point, the TBM is separated from the jacking pipes. Subsequently, the prefabricated cable protection pipe is connected to the jacking pipes still located in the borehole and pulled back and thus into the borehole by the push and pull unit in the launch shaft at the other end. After installation of the protection pipe, the E-Power Pipe® mission is complete. Final insertion of the underground cables is carried out by appropriately specialized companies.

“The method innovation involved the development of new, extended jacking pipes that allow a much more continuous advance. Herrenknecht developed an appropriate push and pull unit with a 10 meter stroke and a push and pull force of 350 tonnes specifically for these jacking pipes. The technology is based on a rack and pinion guide, powered by electric motors. As a result, the innovative concept ensures higher installation performance and greater acceptance thanks to lower noise emissions.” 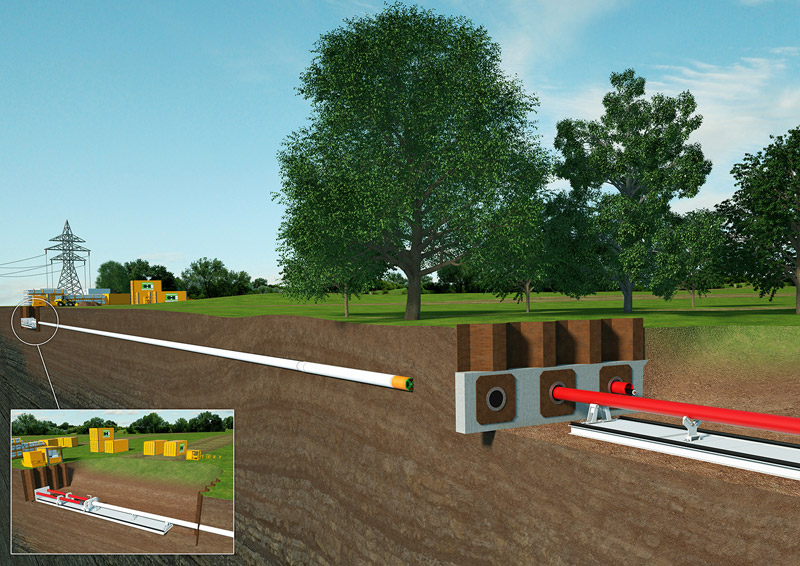