Excavation start at the Brenner Lot H41 (Gola del Sill-Pfons) has been officially with a ground-breaking ceremony with Austrian Federal Minister Leonore Gewessler and Pat Cox, the EU Coordinator for the Scandinavian Mediterranean Corridor of the TEN-T strategic transport network.

Brenner is one of the world’s longest rail tunnels and Lot H41 (Gola del Sill-Pfons) is one of the biggest sections of the Austrian-Italian cross-border tunnelling project in the Alps and is located near the northern end.

The Gola del Sill-Pfons lot extends from near Innsbruck southward to the town of Pfons and includes construction a total of 22.5km of twin main tunnels plus 38 cross passages, an underground Emergency Stop at Innsbruck, and other underground works. 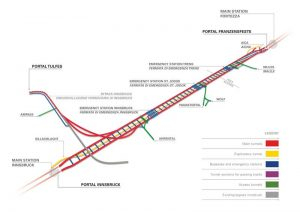 Tunnelling works will be undertaken mostly via access from the previously constructed Ahrental adit. Two TBMs will be used to bore the main tunnels.

The lot is being built by CSC Costruzioni (Swiss subsidiary of Webuild) in a 50/50 joint venture with Implenia. The JV was awarded the €651M contract in late 2021 by project owner BBT SE.

Construction works are required to have a strong focus on the sustainability, including ensuring site logistics are planned to reduce travel times for materials transport, dust is reduced, and water flows treated before discharge to the environment.