Great Britain – After 32 years the Harding prize has been awarded to a female young tunneller. “I am also proud to be the first woman to win since 1986, which is actually the year I was born,” said Leah Jacobs, who works for London Bridge Associates. Jacobs won the competition bringing her paper on “Changing the safety Culture” based on her contribution to the Waterview Connection project in New Zealand.

The Harding Prize competition took place at the Institute of Civil Engineering in London on 19th May. The competition is named after Sir Harold Harding, the founder Chairman of the British Tunnelling Society, and is usually open to all tunnelling engineers aged 33 or below.

BTS chairman Mark Leggett commented Leah’s presentation: “We are all impressed by her passion and I wish her to keep growing her enthusiasm and determination to do well in her career.”

She added: “I am happy for the great representation of the work carried out in New Zealand. “One of the main challenges was coming from abroad and learning how the construction industry works there and comparing to what I was used in the UK.

“Working with people who have not worked within the construction industry before was not easy to manage but we successfully worked with them to ensure they knew exactly what they needed to do.”

Jacobs highlighted during her presentation the value of “safety culture on a worksite”. She mentioned that on the 19 November 2010, there was a methane explosion at the Pike River Mine situated in the West Coast region of the South Island of New Zealand. The explosion was closely followed by a second on 24th November. It was determined that the 29 miners and contractors who were present in the mine during the initial explosion had died. It was the worst mining incident in New Zealand since 43 men died at Ralph’s Mine on the North Island in 1914.

Following the incident, new Health and Safety laws were brought in that applied to the Waterview Project.

Among the methods adopted for improving safety, she talked about “Hazard Identification and Good Staff Cards”.

“The cards were strategically placed around the site and in the offices. Everybody was encouraged to complete the cards and report any hazards and good practices they saw on site,” Jacobs wrote into her paper. “The completion of cards was promoted on a weekly basis by team management and reinforced daily by shift bosses.

“Monthly, the best ‘Good Stuff’ card was given for an award. This was done publicly and normally presented by a member of the PAB to the winner. Additionally, to promote the use of the cards the number of cards submitted were tracked as part of the Key Results in November 2015.”

“This interesting topic and her passionate presentation let Leah win the Harding competition,” said Emma Hale, one of the judges of the Harding prize.

“I also want to thank the other participants for their great presentations, they brought very good topics and it was a pleasure to listen them.”

The other attendees were Paul Chambers, Paul Dryden and Gerard Quigg.

Chambers works as section engineer at Skanska and he has published a research on Humber Pipeline Tunnel Launch Pit and contributed to the original design.

“I was responsible for the planning and construction of the Humber Launch shaft. Developments in best practice for propping schemes were employed successfully, with further research ongoing. My paper evaluates activities such as connecting sheet and secant piles, piling and dewatering in northern chalk and base slab construction. Lessons on the monitoring systems were captured for future works.”

Chambers highlighted an innovation used during the project, the “virtual reality” for the launch pit. “I commissioned the virtual reality to brief the work force,” he said. “Thus, they had a chance to see what they are going to build before to build. This is a high effective way to engage people on work to evaluate risks and methodology in advance.”

Paul Dryden is a tunnel engineer at London Underground and his paper was on the Bank Station Capacity Upgrade.

Dryden explained, “It needed to be improved and the solution was not simple as over thousand people are using the station each morning peek during the week.

Bank station is in the middle of London, in the financial district and the main issue was a multitude of different lines and stations (Waterloo and City Lines, DLR, Central Line, Northern Line, District and Circle Line). Escalators are usually very busy, narrow back-to-back platform with no circulation space and conflicting passenger flow.

“The solution was to build a 1300m tunnel, using SCL lining on the new Northern Line platform,” he said. “We started tunnelling in 2017 from service level with new station entrance on Cannon Street to provide step free access from Northern Line to DLR. From that we built a new entrance and a triple escalator, and to complete the puzzle, we built a 700m interchange.”

Gerard Quigg is a senior engineer at Cowi presented his paper on the Battersea cable tunnel, talking about the renaissance at Battersea’s Iconic power station.

“UK Power Networks building a new electrical substation in Battersea with the capacity to meet power demand for up to 28,000 new homes aiding regeneration of the Battersea, Vauxhall and Nine Elms areas,” he said. “Our scope was to facilitate a connection of new substation to the existing network designing and constructing of a new cable tunnel and connecting our new tunnel to existing and Live UK Power Networks tunnel.

Quigg's contribution included leading the approvals process for all third party assets that the tunnel passed under; designing the structural elements of the access shaft and Launch tunnel; and providing design assurance to the project by fulfilling the role of monitoring engineer during the tunnelling works. 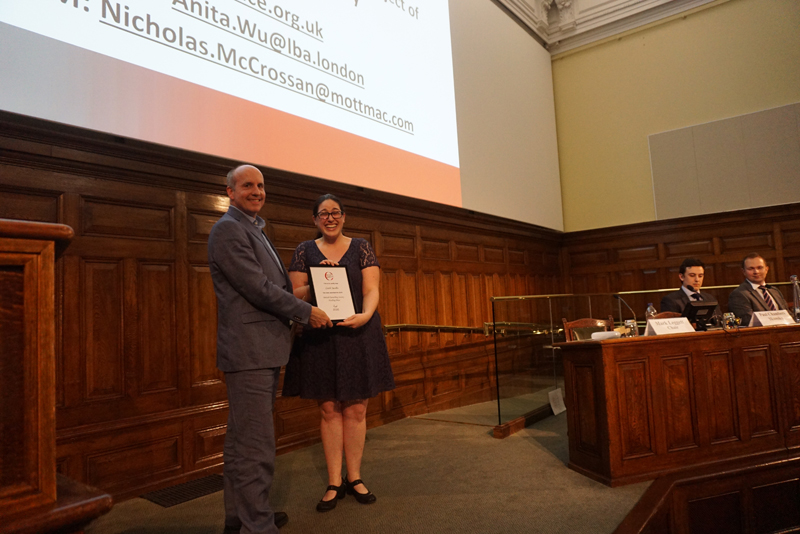