AUSTRALIA – The last of four TBMs to be dismantled after boring the Sydney Metro Northwest project has been removed from its pit. It was the machine dubbed ‘Florence’, which had bored 9km from Bella Vista to Cherrybrook, completing its journey on 14 January.

The drive formed part of the 15km twin tunnels from Bella Vista to Epping section, which also required eight stations. Geology along the drive was Sydney Sandstone and shale. Tunnelling began in September 2014. 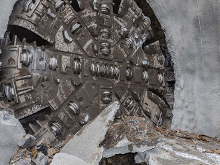 Breakthrough was achieved in January