USA - Salini Impregilo and its U.S. subsidiary The Lane Construction Corporation announced April 4 they have completed the excavation of the Dugway Storage Tunnel (DST), a USD 153M project in Cleveland, Ohio, to help reduce the flow of raw sewage into Lake Erie.

Rather than replace the existing sewer system with separated sanitary and combined sewer overflow (CSO) pipelines, the Northeast Ohio Regional Sewer District, the project owner, decided to handle any additional CSO created by storm or heavy rains with a network of deep tunnels. With an annual storage capacity of more than 370 million gallons, the DST holds the water until the Easterly Wastewater Treatment Plant has the capacity to treat it.

The DST, set to go into service in 2019, is the second of seven tunnels commissioned by the Northeast Ohio Regional Sewer District under the 25-year, USD 3bn Project Clean Lake to reduce CSOs. Like other cities across the United States, Cleveland must meet standards set under the Clean Water Act to reduce sewage discharges that contribute to elevated levels of bacteria, pathogens and other pollutants in streams, rivers and lakes in the surrounding area. The project will improve the quality of the water in the lakes, rivers and streams and public health risks.

The DST has an excavated diameter of 8.2m and is lined with precast tunnel segments to an internal diameter of 7.3m. The tunnel ranges in depth from 60.9m to 70.1m. There are also six shafts of varying diameters and depths, four gate structures, four control vaults, eight vent vaults, three drop manholes, one diversion structure and 550m of connecting tunnels and pipelines of various sizes, depths and lengths. 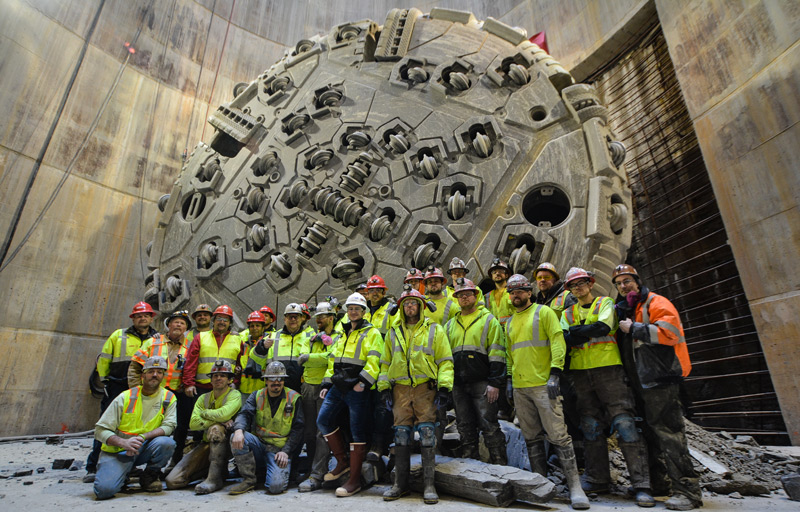