The San Bernardino County Transportation Authority (SBCTA) in California is moving ahead with plans to build a transit tunnel to Ontario International Airport.

The project, in partnership with Ontario International Airport (ONT), will create a transit tunnel between Cucamonga Metrolink Station and ONT for autonomous vehicles.

The design and build contract includes construction of a 7.3m (24ft) diameter single bore tunnel. A centre dividing wall will separate the two travel lanes and cross-passage doors will be placed every 240m (800ft) in the wall. 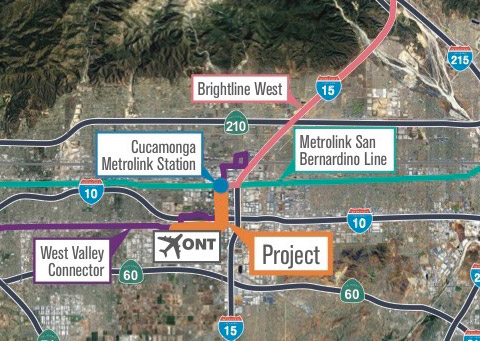 Following the RFQ period, SBCTA will shortlist at least two design-build teams for a 10-month preconstruction (Phase 1) period, leading to selection of a single design-build team to proceed to final design, construction, and O&M (Phase 2). The Phase 2 contract will also include a minimum one-year transitional operations period at the conclusion of construction and system start-up, testing and commissioning.

SBCTA said the two-stage model allowed it and selected contractors to collaborate as an integrated team during the preconstruction phase, and promote innovation. Areas for potential project innovation include tunnel sizing, TBM logistics and operations, and vehicle technology selection.

Ontario International Airport, located in the heart of the San Bernardino Valley, has been the fastest growing commercial airport in the US. Annual passenger numbers are expected to double to 30 million by 2040.

For more information on the bid process, click here [https://www.gosbcta.com/doing-business/bids-rfps/]