Great Britain – The Brunel Museum in London has celebrated the acquisition and housing of a series of hand drawings of the world’s first TBM and associated works for the Thames Tunnel. Described as “the most beautiful Brunel collection ever to enter the public domain” the illustrations were purchased by the museum at auction last year.

On 9 July 2019, The Brunel Museum held its summer reception where these drawings and future plans for the museum were announced. The museum was able to confirm that it had received initial support from The National Lottery Heritage Fund for “The Brunel Museum Reinvented Project. The project is intended to transform the museum, putting one of the most significant feats of engineering in London’s history into a contemporary context as the birthplace of modern tunnelling systems. The project is to include refurbishment of the historic building, improve visitor facilities, extend the current exhibition space.

The British Tunnelling Society assisted the museum with a donation towards work to accommodate the Thames Tunnel watercolour designs, associated with Marc Brunel. The funding will assist with the museum commissioning an interactive screen and housing for their new film on the British Thames Tunnel Collection

Much interest was shown when they were shown as part of Bryn Bird’s, excellent talk “Sir Marc Brunel 250th Anniversary Lecture Brunel's Original Thames Tunnel Drawings: What They Reveal” to The British Tunnelling Society on 16 May 2019. 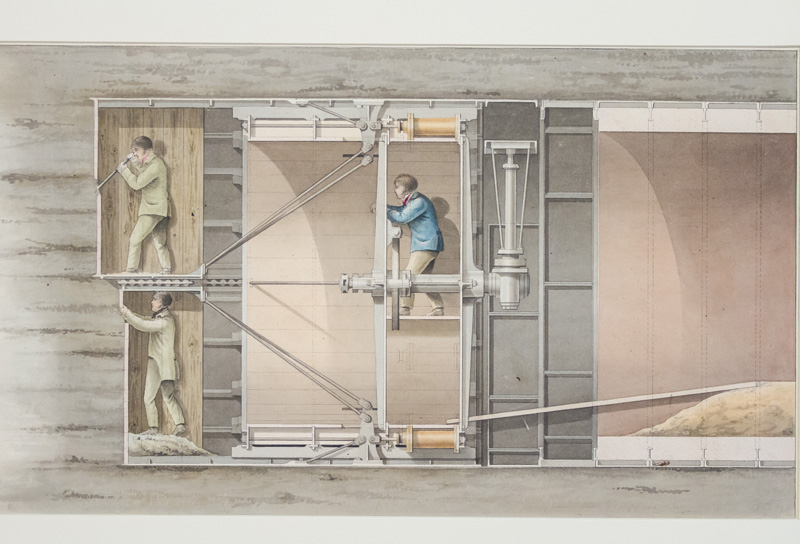