India – A TBM has broken through on the UGC-02 contract of Mumbai Metro Line 3. The breakthrough completes the first section of running tunnel for the project. The section is the 3.82km southbound running tunnel between the Chhatrapati Shivaji Terminal (CST) and Mumbai Central stations.

The contractor is a joint venture of Hindustan Construction Company and Moscow Metrostroy (the HCC-MMS JV). The TBM was a 6.68m diameter Terratec hard rock machine.

With production rates of up to 24m per day (holding the production record for the project), the TBM tunnel was driven via NATM station boxes at an average depth of 20m. It was successfully completed on schedule despite numerous geological and logistical challenges, including the tunnel’s proximity to the ocean, tunnelling through reclaimed land, congested working areas and excavating beneath some of the oldest buildings in the city, many over a century old.

“The team completed this operation in a single drive, boring through geology consisting of basalt, breccia and tuff and reclaimed sand with negligible Settlement,” said Ravi Ranjan Kumar, the client’s chief project manager for UGC-02. “Most of the tunnel alignment is under the oldest and most densely populated area of south Mumbai with many dilapidated residential buildings.”

A spokesperson for Terratec added, “The Terratec single shield TBMs are equipped to operate in either Open or Closed mode and have robust hard rock cutterheads that are mounted with heavy-duty 17” disc cutters, which are interchangeable with ripper tools, and feature large bucket openings that provide a 10% opening ratio.”

Construction of the 33.5km-long line is divided into seven tunnel-and-station packages that were awarded to five contracting joint ventures in 2016. These five contractors have deployed a total of 17 TBMs the carry out the project. 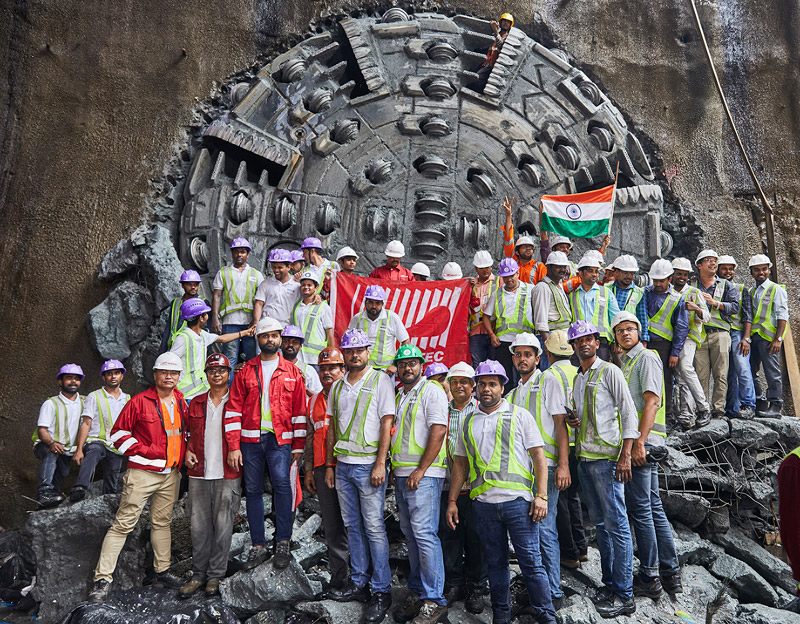