The largest TBM in the Southern Hemisphere has started excavating the West Gate Tunnel in Melbourne, Australia.

The massive EPBM, named Bella, has commenced its journey under Melbourne’s western suburbs to build the alternative to the West Gate Bridge. It is working its way below Yarraville and will travel for 18 months, excavating the 4km outbound tunnel that will meet up with the West Gate Freeway in Altona North.

The TBMs are 15.6m in diameter and 90m long, weighing in at 4,000 tonnes each. They will excavate an average of 9m per day. The tunnel will be lined with a precast segmental lining in a 10 + 0 configuration, held together by 20 circumferential bolts. The lining has an internal diameter of 14.1m and is 500mm thick with a 40mm universal taper. 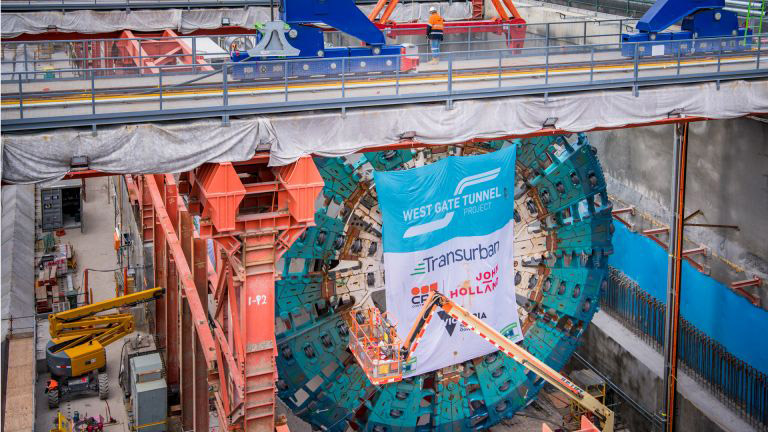 The EPBMs were chosen because of the presence of residual basaltic clays with sections of weak to solid rock and alluvial silty clays in addition to a section with hard basalt up to 250MPa. The EPBMs have been designed to manage all of these conditions, incorporating advanced ground conditioning systems and a high specification of wear protection.

The project is a public private partnership (PPP) between the Victorian government and Transurban, a toll road operator. CPB Contractors and John Holland Joint Venture (CPBJH JV) was awarded the design and construction contract and then the design work to Aurecon and Jacobs.

Last year Transurban confirmed the project was facing a potential A$3.31bn (US$2.42bn) construction cost overrun, but the final figure could be higher.

The government hopes the tunnel will open in 2025, two years later than originally planned.

Much of the delay centred on disputes between the Victorian government, Transurban and CPBJH JV over changes in the requirements for the disposal of three million tonnes of potentially toxic tunnel spoil and the costs involved. The contaminants – per- and polyfluoroalkyls (PFAS) – are known to be potential carcinogens. But other aggravating factors have included the relocation of utilities and the impacts associated with Covid-19 restrictions. Furthermore, a project which had started at a preferred waste disposal site for tunnel spoil has also been severely delayed.