Watercare’s micro TBM Domenica has broken through for the third time on the Central Interceptor project in New Zealand’s largest city.

The TBM emerged at Avondale after digging 1,212m from Blockhouse Bay as part of the first of two branch sewers for Auckland’s new wastewater system. It is the longest drive of the branch sewer project. 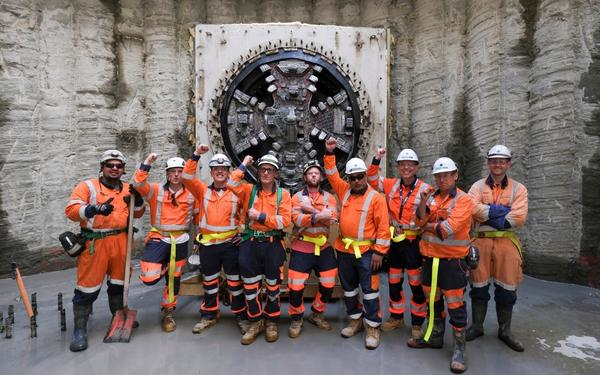 “We are incredibly proud of the efforts of the Ghella Abergeldie JV tunnelling teams who have achieved this milestone more than a month ahead of schedule. They are a tight team with good skills and a bucketload of experience,” said Cunis.

"I’d also like to pay tribute to our designers, who modified the original plans so that we did away with the need for a shaft at Whitney St. This has saved residents considerable disruption, and reduced the cost and carbon footprint of the overall project."

The micro TBM began tunnelling in July last year and travelled up to 25m and lay up to eight 2.1m diameter pipe rings per day.

Domenica will now be removed from the tunnel so the cutterhead can be refurbished before she completes the final 330m early next year.

Work on the second branch sewer, running from a site next to Mount Albert Memorial to Rawalpindi Reserve, is due to begin in August next year.

The branch sewers will connect to the main 14.7km Central Interceptor tunnel, which is currently being laid underneath Manukau Harbour – the first time tunnelling has taken place under a major New Zealand harbour.

The Central Interceptor is the largest wastewater project in New Zealand’s history. It will store 226,000m3 of wastewater, control the flows into treatment plants and reduce the number of wastewater overflows.