Assembly work on HS2 green tunnel to restart next week

HS2 intends to restart assembly of the pre-cast concrete ‘green tunnel’ in Northamptonshire next week.

Assembly was halted in August after quality issues were identified in “a few segments”. Excavation and foundation work continued while tests were conducted on the segments.

A spokesperson for HS2 Ltd told T&T: “Chipping Warden is the first of three green tunnels made of pre-cast segments and it’s important that we take the time to get the quality assurance and installation process right. Initial test results have been positive and we are actively engaging with our supply chain partners to ensure that we are ready to restart assembly as soon as possible. Meanwhile, excavation and foundation works are progressing well and off-site segment production is ongoing.” 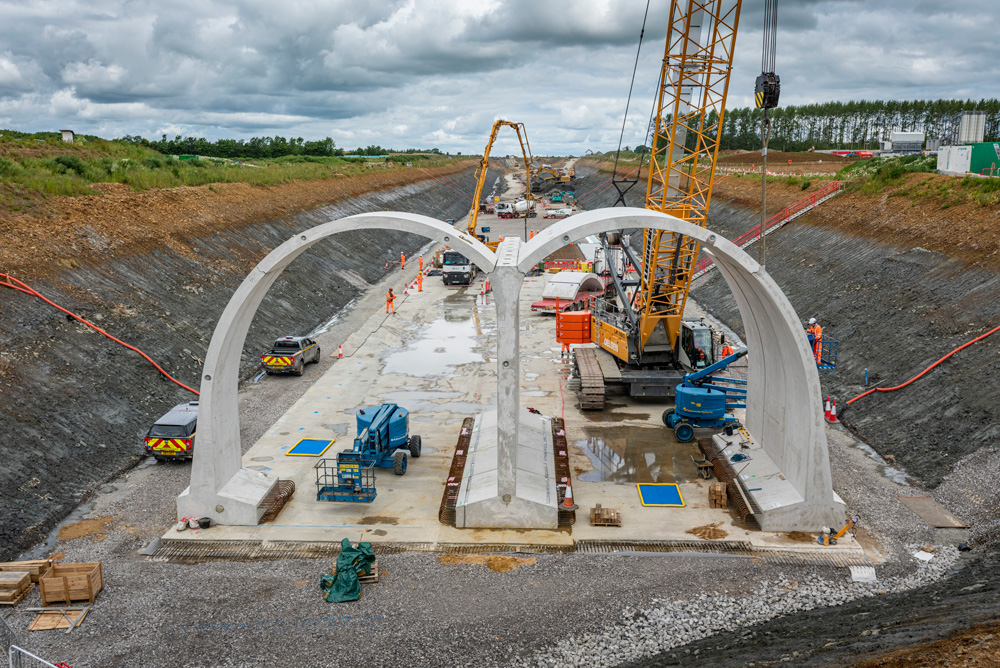 The spokesperson would not comment on the nature of the quality issues.

Construction of the 2.5km tunnel at Chipping Warden in Northamptonshire began earlier this summer and around 100m of the tunnel had been assembled when concerns were raised.

Designed as an M-shaped double arch, the tunnel has separate halves for southbound and northbound trains. Instead of casting the whole tunnel on site, five different concrete pre-cast segments are slotted together to achieve the double arch – one central pier, two side walls and two roof slabs. All 5,020 segments are steel reinforced, with the largest weighing up to 43 tonnes. The completed tunnel will be covered by earth and landscaped to fit in with the surrounding countryside.

The off-site manufacturing process allows the tunnel to be built on the surface, with the aims of speeding up construction, improving efficiency and reducing disruption for communities.

HS2’s main works contractor, EKFB, a consortium of Eiffage, Kier, Ferrovial Construction and BAM Nuttall, developed the off-site approach, taking lessons from the construction of the latest French high-speed lines. It is the first time it has been used in the UK.

Stanton Precast is making the segments for all three tunnels in a factory in Derbyshire.