Aecon has announced that Metro Vancouver awarded a US$225m contract to the Traylor-Aecon General Partnership for the construction of the Annacis Water Supply Tunnel/ Fraser River Crossing project in British Columbia, Canada.

The consortium comprises a partnership involving Aecon (40%) and Traylor Brothers (60%). Its work will include the construction of two deep vertical shafts, one on each side of the Fraser River, connected by a 2,350m tunnel between New Westminster and Surrey, as well as the installation of a watermain, valve chambers and surface piping. 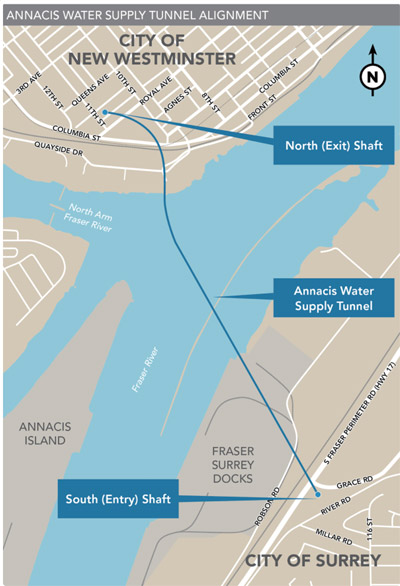 Running up to 50m below the river between the City of New Westminster and the City of Surrey, the Annacis Water Supply Tunnel will be excavated by tunnel boring machine launched from a vertical entry shaft on the Surrey side, progressing north under the river to the exit shaft on the New Westminster side. When excavation is completed, a steel water pipe will be installed in the tunnel and shafts, and be connected to underground valve chambers at each shaft site.

The project will be one of five new water supply tunnel crossings in the region built to withstand a major earthquake. Once complete, the tunnel will help ensure the delivery of clean, safe drinking water in a growing region.