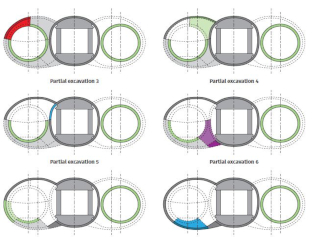 Update on Metro Projects in Europe and Asia 22 June, 2022 R Pandita and M Rehbock-Sander (both of Amberg Engineering) presented this paper at WTC2020 Malaysia and describe selected aspects of European and Asian metro projects, including geotechnics, construction, safety, ventilation and risk > read more

Nat – Back to Rock 22 June, 2022 The biennial NAT tunneling conference will take place at the Philadelphia Marriott Downtown in Philadelphia, US on 19-22 June. Here follow a few tips to get the best out of the event

Inspired through meaning 14 April, 2022 Keivan Rafie looks at why many engineers have recently joined the so-called ‘great resignation’ and suggests that something more than a pay cheque and stable job may be needed

TBM challenges on a demanding sea outfall 14 April, 2022 Gary Peach, project manager and consultant with Mott MacDonald (Doha, Qatar) discusses the challenges and management deployed to overcome and successfully complete what has been hailed as the Middle East’s longest storm and groundwater tunnel

Tunnelers prepare for Nat in ‘Philly’ 14 April, 2022 One of the two major biennial tunneling shows in the US, the North American Tunneling Conference in Philadelphia (NAT2022) is preparing to open its doors for the first time since 2018

Mitigating a water bearing fissure 29 December, 2021 Emily Riley won the British Geotechnical Association’s (BGA) annual Cooling Prize competition for young professionals with her paper ‘The engineering mitigation of a water bearing fissure in the Chalk at the Tideway Deptford Church Street shaft’. It is reproduced here by kind permission of the BGA

3D parametric structural design and documentation workflow 28 December, 2021 Jeff Fontana and Eric Westergren of McMillen Jacobs look back over the past 50 years and note that architecture, engineering and construction have gone through several advances in design development and documentation

Harding prize gains momentum for 2022 28 December, 2021 Young tunnel engineers can raise their profile and make their work visible to the civil engineering community by entering the Harding Prize, named after the founder chairman of the Society, Sir Harold Harding

Set in stone 11 October, 2021 For centuries the home of quarrying and more recently mining of the eponymous stone, Portland, England could become home to an exciting new visitor attraction housed in a mine and demonstrating the potential of underground space. George Demetri reports

A challenge packed drive 11 October, 2021 Erez Allouche, Matthew Devitt and Tyler Horton of Stantec Consulting, and Keivan Rafie of Hatch (Vancouver) discuss the relocation of a gas pipeline microtunneled through complex soils and beneath twin railroads, a river and multiple utility lines

Digging the deal on infrastructure 11 October, 2021 George Demetri takes a look at the state of US infrastructure, the possible causes of its lacklustre performance and how it may be improved, taking in along the way the views of some high-profile engineers and consultants

The doors to success 17 June, 2021 Bernd Hagenah, Sean Cassady, Jesse Harder and Ana Ruiz-Jimenez of HNTB Corp discuss the benefits of and considerations for the implementation of platform edge doors in modern underground transit and metro rail systems

Pipejacking on the rise 30 April, 2021 Pipejacking is typically a horizontal technique. But attempting it vertically from inside a tunnel below the widest river in the world is an altogether new technology that is delivering environmental and economic benefits to Argentina. Julian Champkin reports

Construction claims and dispute resolution 30 April, 2021 Every time the conditions of a construction project change – whether new ideas develop for implementation, or some unanticipated circumstances occur – the project’s cost and schedule will be affected. These changes and their cause could be interpreted by different stakeholders in various ways. So, there could be conflicts, disagreements and disputes on what portion of the cost and project schedule the contractor needs to be compensated for.

RETC RAISES THE CONFERENCE BANNER 30 April, 2021 Following the interruption to the tunnel conference scene caused by the pandemic, the RETC Conference is back and – Covid allowing – looks set to take place in Las Vegas on 13-16 June 2021

Robbins reborn 30 April, 2021 After a brief period involving Chinese part-ownership, veteran TBM pioneer Lok Home has bought back his company to set the revived Robbins on a new course of growth. Julian Champkin spoke to him