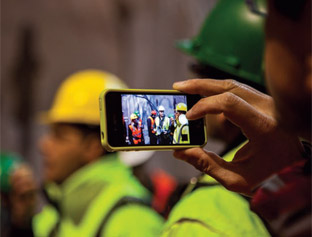 A Broad Education 31 October, 2016 Implementing sustainable field training for geology and geological engineering is mutually beneficial for students and industry. Nicholas Vlachopoulos, professor in the civil engineering department, and Efrosyni-Maria Skordaki, geosciences research staff, both of the Royal Military College of Canada, report on a tunnelling field course in Greece > read more

Managing the evolving relationship between the CMAR and project owner 19 December, 2011 The construction-manager-at-risk (CMAR) on the Ina Road Wastewater Reclamation Facility Project in Tucson, Arizona, recently met with the project’s owner, Pima County, to discuss their ongoing progress and collaboration. They agreed there are important steps every CMAR and owner can take to manage the project’s progress, reduce or eliminate project costs, and build the foundation for an effective business relationship

Down and grout 18 October, 2011 The compensation grouting program under York University’s Seymour Schulich School of Business, for part of the Toronto-York Spadina Subway Extension, is designed to be both a proactive and reactive system. Jeb Pittsinger, Jon Davies and Gary Kramer, of Hatch Mott MacDonald, and Edward Poon, of Toronto Transit Commission report

When T&TI selected ‘hand mining and the alternatives’ as a subject worthy of examining, we were aware of the issue of HAVS (Hand-Air Vibration Syndrome) associated with powered hand mining...

Experiences with sprayed waterproofing 23 August, 2011 The following article is based on a presentaton made to the ‘Underground Construction‘ conference in June in London and is based on the experiences of three tunnel engineers on projects utilising sprayed waterproof membranes. The authors are David Naylor, Petr Salak and Simon Stephenson, at the time all of Mott MacDonald consulting engineers

Use of underground space in Korea 14 June, 2011 Hee Soon Shin, of Korea Institute of Geoscience & Mineral Resources in Daejeon, provides this paper