Walsh-Shea Corridor Constructors is the contractor and comprised of Walsh, Shea, HNTB, Comstock and Arup.

Metro said mining progress was about 60ft (18m) per day and for the second tunnel. A crew of 75 workers manned the TBM over three shifts, five days per week. 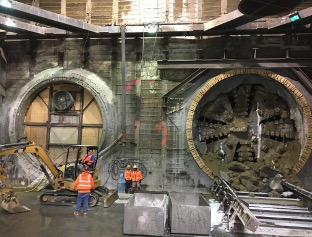