Washington – A new stormwater tunnel will be built in Washington within a dense urban area where unexpected ground conditions might happen.

With a capacity of 75M gal (284M litres), a 4.34km-long storage tunnel, also known as the Ship Canal Water Quality project, is set to be constructed in Washington in December 2019.

The tunnel has an internal diameter of 18ft 10inch (254mm) and it will keep polluted storm water and sewage out of the Lake Washington Ship Canal, Salmon Bay, and Lake Union as well as many older parts of the City of Seattle, including the Ballard, Fremont, Wallingford, and Queen Anne neighbourhoods, which are collected and conveyed in one set of pipes. In dry weather conditions, all sewage flows to a local wastewater treatment plant. During wet weather conditions, polluted runoff can exceed the pipes’ capacity and send a mixture of stormwater (90%) and sewage (10%) to outfalls that flow into the nearest water body.

The Lane Construction Corporation, the US subsidiary of Salini Impregilo Group, won the contract of USD 255M (EUR 231M) in October. Construction works are scheduled to be completed in 2023.

The project is located within the Puget Lowlands, where depth to bedrock ranges from1,800ft (548.64m) to 2,500ft (762m) in depth. The ground surface in the Seattle area includes glacial and non-glacial sediments deposited during the Quaternary Period (within the last 2 million years) over Tertiary volcanic and sedimentary-bedrock. However, only the late Quaternary and Holocene (within the last 10,000 years) deposits are exposed in the project area at land surface, or are present at the depths of the excavations in this project.

Ground conditions have been categorised into seven Engineering Soil Units (ESUs) grouped as either non-overridden or glacially overridden. The non-overridden deposits include engineered and non-engineered fill, recent granular deposits, and recent clays and silts. The glacially-overridden deposits are very dense or hard due to the compression from over 914.4m (3,000ft) of ice and include till and till-like deposits, cohesionless sand and gravel, cohesionless silt and fine sand, and cohesive clay and silt. Shafts on the project may extend vertically through all seven of the ESU’s. The tunnel and microtunnel alignments are primarily within the till and till-like deposits ESU, which is a very dense and highly variable unit that is a mixture of gravel, sand, silt, and clay, and may contain localised layers and lenses of the other glacially-overridden ESUs. Groundwater in the project area is very near the ground surface, and the tunnel may experience up to approximately 3.5bar of pressure.

There are five shafts on the project:

The tunnel will be excavated by a pressurized face TBM and two short adits will be constructed using conventional mining techniques, although either jet grout or ground freeze ground improvement is required for each. The adits will be finished with a CIP reinforced concrete lining.

The microtunnel will be excavated using an SPB microtunnel machine and will have an internal diameter of 94inch (2.38m). The casing pipe has to be either reinforced concrete or polymer concrete pipe, and pipe joints have to utilise the Jackcontrol AG hydraulic joint system due to the curve in the alignment. The microtunnel will be finished with 18inch (452.2mm), 30inch (762mm), and 42inch (1m) pipes and the annulus backfilled.

The initial and final tunnel lining will be provided by a reinforced concrete bolted and gasketed segmental lining system. The segmental lining system has been designed using steel bar reinforcement. However, the contractor might redesign the segments using steel fibre reinforcement if required. The lining system was designed assuming a configuration of six segments per ring, each having a nominal length of 5ft (1.52m). The segment thickness is a minimum of 10inch (254mm). The actual segment geometry will be finalised by the contractor based on their TBM selection.

Ward says, “Seattle Public Utilities (SPU) has identified and evaluated subsurface and cultural and archaeological conditions, created response plans in case of a discovery, coordinate with other utilities, and created contract documents to require appropriate TBM design and maintenance while also giving the contractor flexibility to optimize their mining operations.

“SPU’s work is in response to one of the biggest risks identified, which include unexpected underground conditions, which could range from contamination, soil and groundwater conditions, archaeological discoveries, utilities, or even the wear and tear on the TBM caused by the ground.”

All of the project sites are located in dense urban areas that can make construction work challenging and impact our community in terms of traffic, loss of parking, noise and so on.

Ward adds that they have conducted a significant outreach during design and have modified the design including constraints on construction work to reduce impacts where appropriate. Some specific measures taken include requiring tunnel spoils to be removed by barge when possible, securing additional property for contractor laydown, including sounds walls at several sites, and restricting roadway closures. 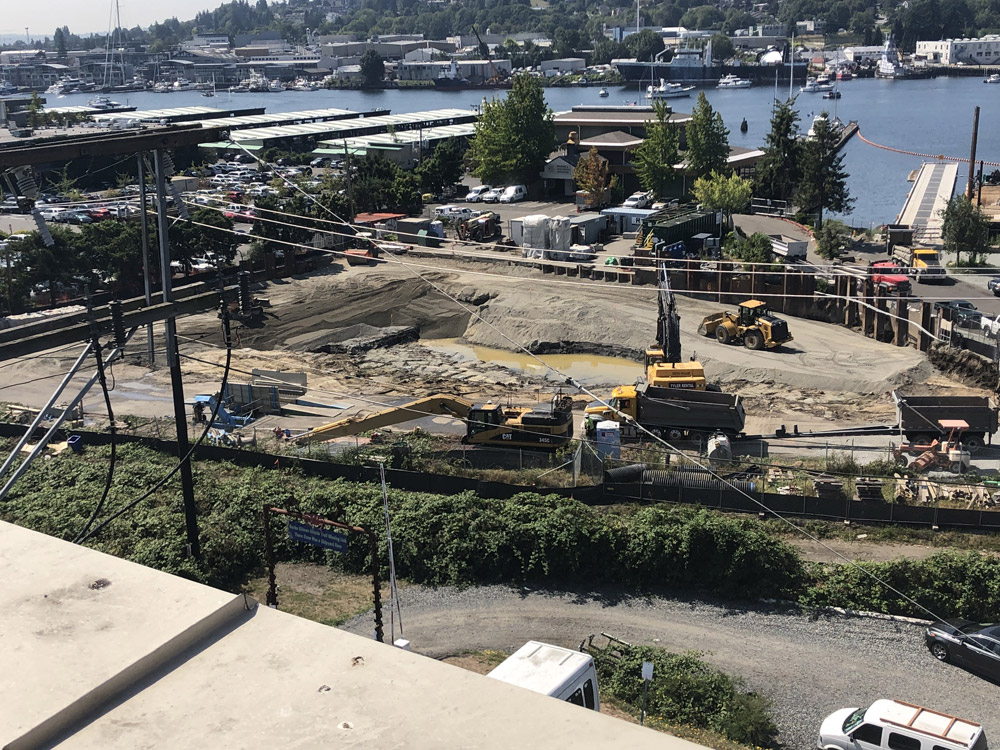