A new conveyor has started operating on HS2’s Long Itchington Wood Tunnel site to carry more than 750,000 tonnes of excavated material over the Grand Union Canal where it will be reused in other locations on the project.

HS2’s civils contractor for the Midlands, Balfour Beatty Vinci (BBV), has built the 254m-long machine to move material being excavated from Long Itchington Wood Tunnel and a railway cutting in the same location in Warwickshire.

It is expected that the new shortcut will remove the equivalent of around 30,000 HGVs from local roads, reducing impacts on the local community and cutting carbon. The conveyor will operate until early 2023, before it is dismantled and rebuilt at Water Orton as part of a 1,200m-long conveyor. 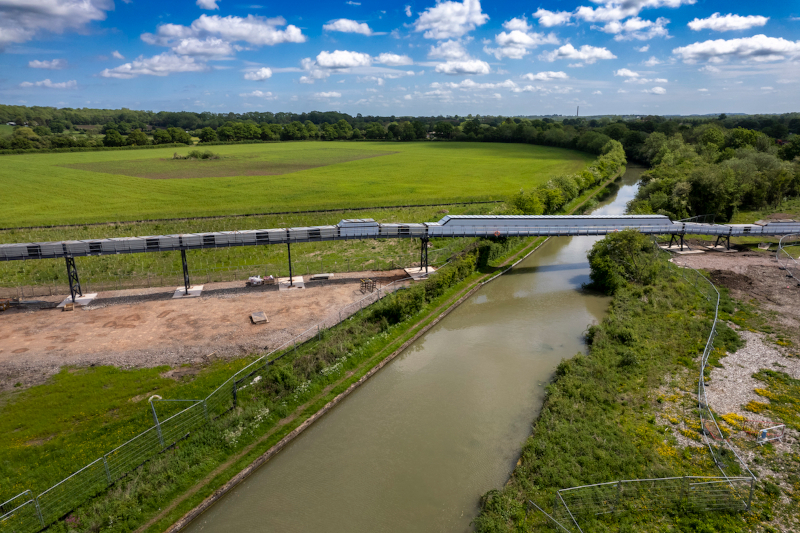 HS2 Ltd senior project manager Alan Payne said the organisation was working closely with its supply chain to reduce carbon across the project and find construction solutions to minimise disruption around the work sites.

“It’s initiatives like this that will help us achieve our ambitious target of being net zero carbon as a project from 2035, helping to put HS2 at the centre of Britain’s sustainable transport network,” he said.

BBV senior plant and equipment manager Ed Morgan said the joint venture aimed to reduce the impact on local communities wherever possible and to reduce carbon across the project.

“Our new conveyor does both,” he said. “We can now move material from our tunnel boring activity and reuse it at other locations along the route. This will reduce construction traffic and, ultimately, help us to contribute to HS2’s carbon targets.

“We’ll continue to embrace innovation and adapt our construction methods to leave a lasting positive legacy on the areas we operate in.”

Excavation of the twin bore tunnel will produce around 500,000 tonnes of mudstone and soil, which is processed at an on-site slurry treatment plant and separated out before being transported by the conveyer to be used to build embankments along the HS2 route. An additional 250,000 tonnes of material will come from excavations for a railway cutting, which will also be transported by the conveyor.