The TBM, a 21.5ft diameter Herrenknecht machine, named for Harriet Tubman, will be used to excavate twin 1-mile tunnels at the northern end of the new rail line. The segment that will include three underground stations: Crenshaw/Expo, Martin Luther King Jr. and Leimert Park.

Metro says the TBM will be lowered by segments and assembled underground in the next few weeks. Boring is expected to last approximately 13 months and to advance by about 60ft per day. When the TBM reaches Leimert Park Station it will be disassembled and returned to the Expo Yard, where it will be lowered again and launched to excavate the second tunnel.

The 8.5-mile Crenshaw/LAX Line is a USD 2.058bn light rail line that will run between the Green Line and the Expo Line. It will have eight new stations to serve the Crenshaw, Inglewood and LAX communities. The project is being built by Walsh-Shea Corridor Constructors, comprised of Walsh, Shea, HNTB, Comstock and Arup. It is expected to open in 2019. 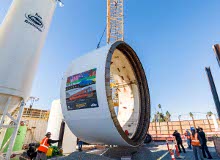 The TBM lowering ceremony was held on 1 February