THE MONCALIERI EXTENSION OF the Metro Line 1 in Turin is nearly ready. Breakthrough at Lingotto Station took place on 6 June 2018, marking the end of excavation through the dense, urban environment of Turin, with its associated historical buildings. The new extension runs from the existing Lingotto station up to Piazza Bengasi (Bengasi Square). Contractor CMC di Ravenna is constructing the 1.73km-long, 6.8m ID single-bore for two clients: Infrato, which manages the Turin Metro, and GTT a local transportation company. Lombardi is the designer.

Excavation work has also been completed on all related stations and shafts, and the contractors are now focused on inside finishing work and other fit-out.

CHOICE OF THE EXCAVATION SYSTEM

Lombardi’s technical director Alessandro Damiani tells Tunnels and Tunnelling that the tunnel has been excavated by a Herrenknecht EPB with an excavation diameter of 7.76m. Damiani explains, “We used an EPB after considering several aspects during a value engineering analysis:

¦ High control and limited quantity of conditioning material to add (and extract) for the excavation;

¦ High performance in the expected context;

¦ Good ratio between costs and expected production. “In addition, we have had a good experience with EPBMs in Turin for other underground lines, so we would say this technology is one of the best for applications in urban areas.” The main situations of interest during excavation were:

The table below shows the watertable conditions, where ‘Hw’ stands for the height of water from the axis of the tunnel and ‘pw’ is the corresponding pressure in bar (1bar=100 kPa).

All of the stations are of a similar design and were excavated top-down. “First, diaphragm walls were sunk around the perimeter down to the depth of excavation, which was 15 to 25m depending on the station,” says CMC project manager Lorenzo Fiorentino, “then a bottom plug was jet-grouted due to groundwater, and then excavation began from the surface.”

After this reinforced concrete slab is built, the contractor excavates down to the level of an upper slab (the atrium floor), at 7m below the surface level. Once this is cast, excavation continues to the 25m depth.

Diaphragm walls were constructed by hydromill, which allows the construction of panels with a max deviation from the vertical of about 0.1-0.3 per cent, at depths to beyond 33m. With this technology, it is possible to excavate diaphragm walls in soil layers and bedrocks. The hydromill also allows the correction of any deviation from the vertical while excavating.

The top-down excavation is between 15 and 25m, while the length of the diaphragms is roughly 33m.

The diaphragm wall construction sequence by hydromill and overlapping primary/secondary panels ensure higher chances of watertight joints than conventional grabs. By relying on hydromill technology, it is possible to excavate diaphragms of 2.5m width for 1.4m thickness.

Damiani explains that it was quite challenging to eliminate struts inside the station because they would have delayed the excavation works and in turn, increased costs on the whole project. Thus, they decided to go down up to 14m without them. “We were already at 8m of the ground level when we built the mezzanine floor,” Damiani says. “We excavated further down up to 14m without struts checking strains (deformations) of diaphragm walls. Specifically, we verified that such strains couldn’t not cause any subsidence and in turn, any damage to the existing structures.

The TBM started its drive from Bengasi up to the terminal shaft in Moncalieri for 208m, where the TBM has been extracted and re-transported on the road towards Bengasi station.

There it was been lowered down and it excavated until Italia ‘61 station (836 m). Inside Italia ‘61 the TBM had a longitudinal translation of the station without excavating. And then, it approached the diaphragm of the station’s head. After that, the TBM started excavating again towards Lingotto for other 687m.

Fiorentino explains that the TBM couldn’t be mounted at Lingotto station, because the Lingotto subway station has always been in service for the public, during the southern extension work activities.

Starting the TBM excavation from this station would have had a devastating impact on the population’s use of the existing metro. “For the same reasons the TBM couldn’t start its drive from the terminal shaft, because the construction site surface area was too limited and adjacent to a 10-storey building,” Fiorentino says.

Particularly crucial sections were the entrances and exits of the stations due to the potential presence of water. “in Bengasi station was so decided to use a sealing ring, (iron semi-circular structures, bolted together and bolted with special anchorage to the diaphragm wall.

“A special polypropylene gasket is then bolted, which is specifically filled with grease and then inflated, adapts to the geometry of the TBM) to control water inside the excavation,” Fiorentino says.

“Bengasi station was able to contain the whole components of the TBM but the station didn’t have enough space to store all the segments. The majority of segments have been stored at the production plant, which is located at 60km from Bengasi station.

“Some interference issues have been met at the surface in the proximity of intermediate shafts and Italia 61 station. Jet grouting ensures vertical waterproofing, but not the horizontal one that is fundamental, especially when geologically meeting different layers of sandy clay and finding also of different dimensions.” GROUND SUPPORT

Fiorentino explains that some treatments with resins injections were required in the last section of the tunnel because there were confined volumes/areas, which led to water leakages. “As the pressure drops, it’s not possible to support the excavation face.

“The jet-grouting treatments are useful to avoid any subsidence from the surface level, and to completely waterproof the tunnel entrances,” he says.

The spoil has been transported with opportune muck-cars at Bengasi station and by a 40t gantry crane, it has been raised to the surface.

Trucks transported it to a replenishment site, where it has been analysed before bringing it to the landfill.

A part of the extract material has been reused to backfill of existing quarries and another one for concrete plant. Other types of ground support included diaphragms for bulkheads and also the Cased Auger Piles (CAP) technology, which consists of drilling separate piles by means of a continuous flight auger coaxial to an external casing.

The same technology has been also used to drill secant piles at two of the shafts. In this case the technology is called cased secant piles. The auger and casing are operated by two independent rotary tables, which mutually counter rotate and travel along the mast of the drilling rig at the entrance and the exit of stations. The same ground support was carried out at the head of ventilation shafts.

Manufactured by GED (part of CMC of Ravenna), segments have a thickness of 300mm and a length of 1.4m. The ring is a 3+3 segment arrangement. The internal lining is a precast ring composed by 6 r. c. segments. The precast ring is 300mm thick and its external diameter is 7.48m for a length of 1.40m.

The total number of segments is 7,548 segments and in turn, 1,237 rings Fama anchored gaskets have been used to avoid water ingress, apart from this no other waterproofing was needed apart from annular grouting.

As for other structures, all of the stations and shafts have been waterproofed into compartments with a network of cast in place compatible water stops welded to the membrane.

In this way it is possible to isolate any leak, operated with bi-component or mono-component resin injections on the affected compartment. 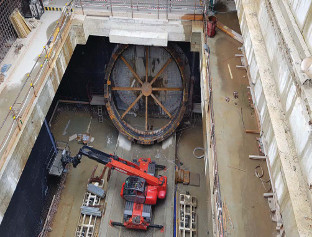 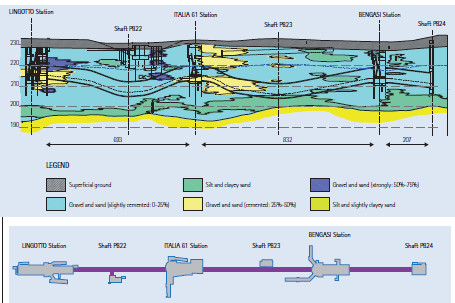 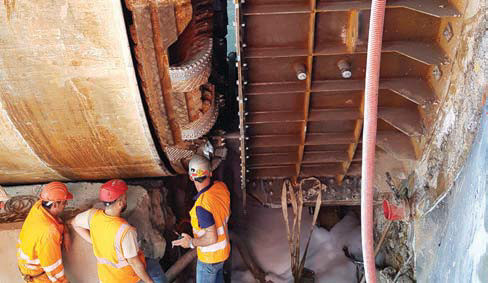 TBM is moved towards the tunnel eye 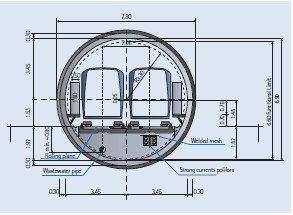