A slurry TBM encountered an unexpected drift filled hollow (DFH) on the Lee Tunnel drive. Three contributors told their part of the story: project geotechnical engineer Tim Newman gave a description of the project and some of the GI undertaken ahead of the drive, tunnel construction manager John Corcoran spoke about tunnel operations and consultant geologist Jackie Skipper about emergency response site team, forensic ground investigation to gauge extent of DFH, what is a DFH and tell-tale signs. Martyn Noak from Jacobs reports

The Lee Tunnel is part of the Tideway project and it carries flows from the Abbey Mills Pumping Station to the Beckton STW for treatment. The aim of the tunnel is to divert 16m tonnes of effluent annually from discharging into the River Lee. The tunnel took two years to construct and is 6.9km in length beneath the street of the London Borough of Newham at a depth of between 55 and 70m below ground level. It is 7.2m ID and was completed in January 2014.

The tunnel was mined from east to west with from a 20m diameter launch shaft to a 25m diameter reception shaft. At the lowest point of the drive, the tunnel passed through an interconnector shaft which in turn was connected to a 40m diameter pump shaft. Being a densely populated urban area, one would expect some significant infrastructure above the tunnel and this was present in the form of the A13, the DLR and the JLEP. At the halfway point of the drive was Newham General Hospital and the tunnel also followed Bazalgette’s Northern Outfall Sewer (NOS) for most of its length. This is a brick-lined, cut-and-cover structure with five tubes (three original and two added later) carrying a peak flow of 30cumecs.

As they so closely followed the proposed line of the tunnel, Bazalgette’s geological long sections formed the desktop study. These typical Victorian works of art very clearly indicated where the top of the London Clay could be found and gave no indication of anything untoward within the alignment. Archive boreholes and ground investigation data were few and far between so the original ground model was augmented with a further 26 new boreholes. These were carefully supervised with numerous reviews of the data and experience and trained loggers all the time looking for evidence of a Drift Filled Hollow (DFH). All these 26 new boreholes were driven into competent chalk with the exception of BH10, which encountered sand. Consequently, further boreholes were commissioned on either side, which contributed to the pre-construction ground model.

There are two significant geological features of note. The Greenwich Fault zone where a proved vertical displacement of 39m over a length of 500m was identified and the Plaistow Graben, an unknown fault system 900m in length characterised by the presence of Thanet Sand within the tunnel horizon. These two features resulted in the tunnel being lowered by 10m at the western (Abbey Mills Pumping Station) end. This coincidentally had a positive effect on the subsequent Tideway tunnel with an improved hydraulic gradient.

Around Christmas 2011, the 840T slurry machine “Bizzie Lizzie” was lowered into the shaft. As with all slurry machine drives, pressure limits were established in the slurry bubble to be greater than ground water pressure with the tailskin grouting pressure also needing to be balanced with the slurry pressure to prevent slurry from entering through the tailskin, which was sealed with tailskin brushes.

In the first 16 months of the drive up to 10 July 2013, 2,198 rings out of approximately 4,000 were built and the machine had performed as expected. The tailskin brushes were however found to be deteriorating more quickly than expected causing grout ingress into the ring build area and a number of maintenance interventions had to be made to replace them. At ring 1,161 a discussion among the site team considered a reduction in the slurry pressure as the ground to date had been so competent. This would have had the benefit of reducing the inflow of grout through the deteriorating brushes. Given what was to come, the fortuitous decision was made instead to improve the brush design and install an upgraded greasing system.

Passing through the drift filled hollow

The next 1,000 rings were driven at rate of 150m/week, much improved progress until 11 July 2013 when, in a period of five and a half days and 58 rings, a change was noticed in the chalk colour. Brown stains had begun to appear – was this perhaps the start of the Plaistow Graben? Then a number of increasingly alarming events occurred: a hole formed above the shield, whole flints began to appear in the slurry (which is unusual and suggests the ground is softer), more grout take was experienced, and reduced cutter head torque and thrust was required to advance. Then, at 2am on the night of 16 July 2013, River Terrace Deposits (i.e., material from the surface) were found in the slurry. The TBM didn’t stop, the drive pressed on, the face pressure was increased by 0.7bar and the machine was through the zone. The rest of the drive passed without incident – including the Graben. Altogether it was estimated that the approach to the DFH was in the order of 100m and the zone itself was only 10m in length.

Settlement along the drive had been typically in the region of 2-3mm. Through the DFH this increased instantaneously and to the order of several millimetres a day. The DFH had been encountered beneath the Northern Outfall Sewer and outside Newham Hospital in the vicinity of hospital services including a National Gird gas pressure reduction facility and a 10-inch (254mm) gas main at 6m below ground level causing some concern. A further review of available ground investigation data now revealed some additional boreholes in the hospital grounds that had not been available before. These confirmed the presence of the DFH and allowed a new emergency ground model to be developed.

Initial settlement on encountering the feature was measured at 17mm which levelled out at 23mm. Due to the location of the incident next to the NOS the project team had concerns that voids may have opened up beneath the brick lining. Four boreholes were commissioned in August 2013, three of which were cored directly through the NOS; these confirmed that the NOS was undamaged by the settlement with the brickwork in good condition. Similarly, no voids had formed under the NOS, perhaps due to dilation of the Alluvium. The initial stratigraphy below the sewer was confirmed to be: Alluvium to 14m, River Terrace Gravel to 21m then very disturbed layers of Chalk, Thanet Sand and River Terrance Deposits. Some abnormal features worth noting included:

Five months after the encounter with the DFH, the surface settlement monitoring noted a significant increase in the settlement trend that correlated with a drop in water level in the lower aquifer. The team looked for known local abstractions and discovered that this coincided with Crossrail dewatering on the nearby Limmo Peninsular site. The Crossrail geotechnical team was approached and through collaborative data exchange between Crossrail, the Lee Tunnel and Thames Water project teams the water levels and ensuing settlement were closely monitored and modelled.

This was a significant development as it demonstrated that major dewatering in one area (which also happened to be close to a DFH) was able to impact the behaviour of water levels and infill settlement on another DFH over a distance of 2.8km. The DFHs were talking to each other.

Lessons learned from the Lee Tunnel experience can be divided into two categories. In terms of our understanding of DFHs we have learned that their geology is far more complex than previously thought, large DFHs adversely affect the ground at greater depth than previously thought and large DFHs reaching the chalk may be in hydrological communication over considerable distances. In terms of the management of the tunnelling process through DFHs we have learned that even well-controlled encounters with a DFH at depth can lead to settlement at ground level, and good communication and planning are imperative for a satisfactory outcome. Looking to the future, the designers are satisfied that there are no long-term implications for the tunnel given the disturbed geology at depth, and thankfully the Northern Outfall Sewer is not at risk.

Looking back in hindsight, the team have asked themselves several searching questions.

And finally, if you suspect one, report it. 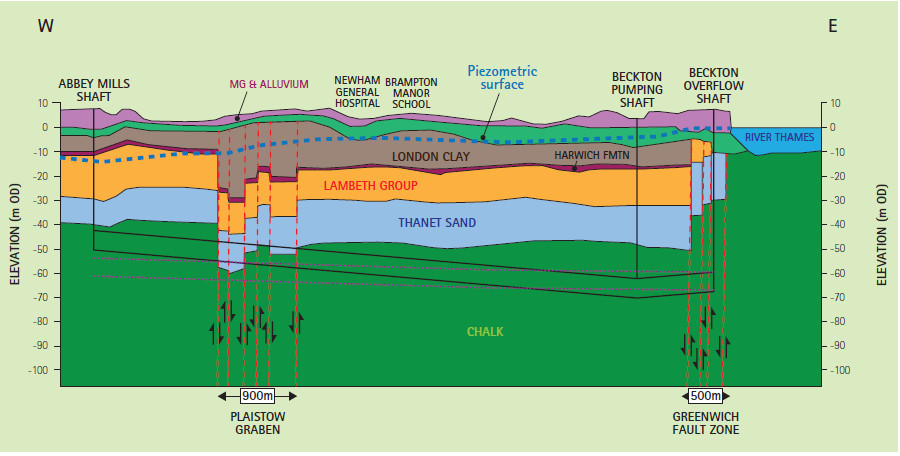 Schematic showing the passage of the TBM through the DFH 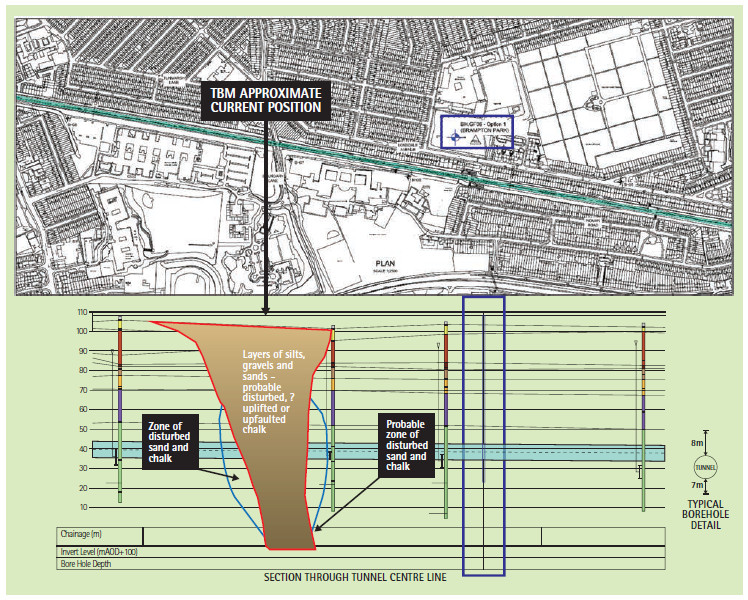 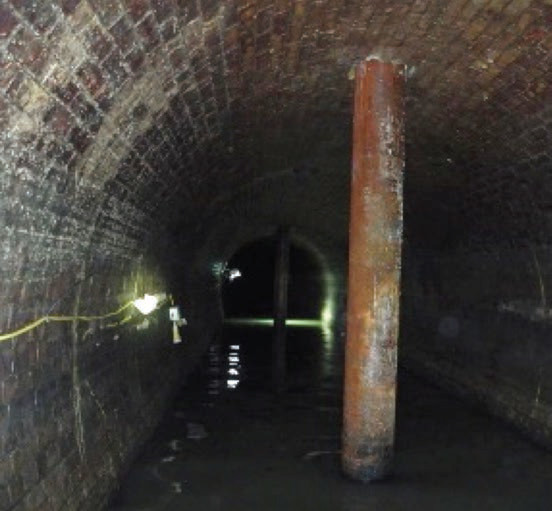 One of the August 2013 boreholes penetrating the NOS 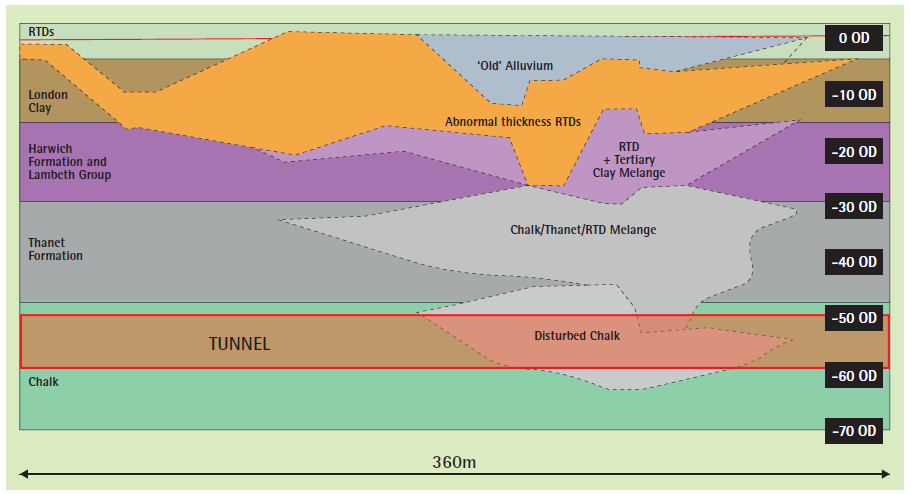