A joint venture of Ferrovial Agroman and Laing O’Rourke (FLO) has revealed the two tunnel boring machines to be used in the Northern Line Extension project under South London in the UK.

‘Helen’ and ‘Amy’, named after the first British astronaut in space, Helen Sharman, and British aviation pioneer Amy Johnson, are 6m in diameter and will start tunnelling from Battersea.

The project will extend the Charing Cross branch of the Northern line from Kennington to Battersea, via Nine Elms — helping regenerate the Vauxhall, Nine Elms and Battersea areas.

The mayor of London, Sadiq Khan, said: “It’s great news that we are going to begin tunnelling for the Northern Line Extension.  Extending the line to Nine Elms and Battersea is going to be a real boost to south London, with the improved transport link helping to provide thousands of homes and jobs for Londoners. I’m also delighted that local schoolchildren have chosen two such inspirational British women as the names for these tunnelling machines.”

David Darcy, project director of the Northern Line Extension, said: ‘With our two TBMs now ceremonially named, in the tradition adopted across the tunnelling world, we will follow their progress in a ‘personal’ way. We will ensure that these two majestic ‘ladies’ are thoroughly cared for on their very important journeys. We wish Helen and Amy bon voyage!”

The Northern Line Extension, expected to cost up to £1.2bn, is supporting around 1,000 jobs, including 50 apprenticeships.

The project, the first major tube line extension since the Jubilee line in the 1990s, is scheduled for completion in 2020. 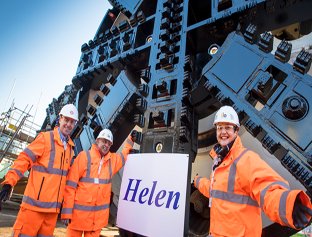