USA – The Bay Tunnel project has been named the 2015 American Society of Civil Engineers (ASCE) Region 9 Outstanding Water Project. The 8km-long, 4.6m id tunnel was brought into service in October 2014, well ahead of an original 2015 schedule.

The project, designed by McMillen Jacobs Associates and constructed by a joint venture of Michels, Jay Dee and Coluccio, was also under budget at USD 288M. It was expected to come in at USD 313M.

The tunnel component is the first bore ever made underneath the Bay - the old pipes sit on the bed - and so the geology was a relative unknown. Test drill probes indicated mostly clay but with embedded sand lenses up to 0.6m thick and there was an outcrop of the San Francisco complex, harder ground up to 10MPa, running for some (250m).

A Hitachi Zosen EPBM was chosen for the bore, and was designed primarily for soft ground but was fitted with shell bits for harder rock. Shell bits are rippers, but with a concave shape like a seashell. The contractor said the machine performed well and project manager Ed Whitman said it was one of the best machines he had ever worked on. Pressures of up to 3.2 bar was encountered.

A spokesman for McMillen Jacobs Associates added, "The presence of environmentally sensitive habitats on the Bay margins precluded using cut-and-cover pipelines, which resulted in the need for an 8km-long tunnel with only launching and receiving shafts and no intermediate construction shafts [...] Despite numerous challenges, the tunneling was completed eight months ahead of schedule." 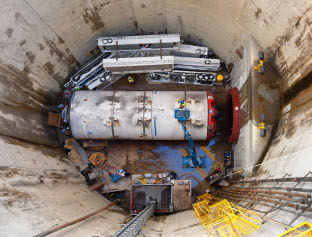